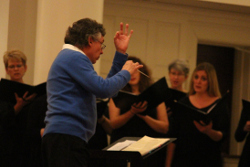 The Bach Chorale was originally assembled by Dr. Martin Werner to perform during the inaugural Grand Rapids Bach Festival in 1997. The chorale served as the core chorus in the 1999 Bach Festival performance of the Mass in B Minor and for the St. John Passion in 2001, under the direction of guest conductor Karl Hochreither.

Dr. Martin Werner studied orchestral conducting, cello and choral conducting in his native Germany before spending a year at California State University, Fullerton as a graduate student and student conductor of the University Singers. He received a Doctor of Musical Arts in Conducting from the University of Michigan in 1985 and later served as assistant chorus master for the Concert Choir for the City of Düsseldorf, Germany. He was chorus master of the Grand Rapids Symphony Chorus from 1993 to 1999 and has also been choir director for several Grand Rapids churches. In 1997, he became music director and conductor for the Bach Chorale.

In the spring of 2009, the Bach Chorale was incorporated as The Bach Chorale of Grand Rapids. As of April 29, 2009, we have been confirmed as a non-profit 501(c)3 organization, able to receive tax-deductible contributions.

The Michigan Cultural Data Project report for 2015 is available here.